Spec of a Spec

Another previously unreleased song. We did this one live at Petra’s Bar back in December. Keep an eye out for a few more of them we did at the same time. Enjoy.

We went down to Clemson, SC a few weeks ago to play a house show put on by some good folks. WSBF came out and did a live session with us earlier that evening. This song will be on our upcoming record and is until now unreleased except for this video. Enjoy! 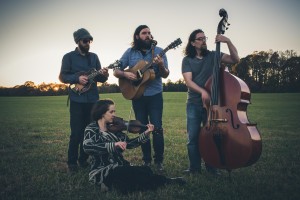 Elonzo Wesley started as an offshoot of Elonzo. After writing and releasing records with that project for around 6 years, we decided to call it quits as a band. I had to start new. So I spent 2015 playing solo shows, touring when I could, and was lucky enough to be able to release two EP’s (“To Be True” and a split 7″ with Sinners and Saints “This Ain’t No Country Song”).

Sometime during the summer (2015) I met Taylor Winchester at a show. We talked about potentially playing together, but it wasn’t until that fall that we actually would. In November, we played our first set together as a duo opening for the now renowned SUSTO. The show went well and it was a welcome feeling to have someone else on stage with me.

After playing for a few months together, and realizing we might be on to something with the string band idea, we invited along one of my old friends, Dennis Contreras to start playing upright bass with us. Shortly after that I met our now violinist Alicia Driver while I was working the sound booth at a club here in Charlotte for another band she was playing with.

All that to say, 2016 was a really good for Elonzo Wesley. We are growing leaps and bounds musically I’m really happy about the music we are making together. We’re working on a new record that will be out by the summer….. so stay tuned!

Jeremy Davis ( and all the EW Crew )

Over the past few years I’ve seen Dear Blanca play a number of times, listened to their records, and more recently run sound for them at a local venue in here in Charlotte. Every time they play this song it hits me , and the original version, recorded by none other than Mr. Bo White, is really great as well.

The artwork is a painting called “Babylon Don’t Love You” by my friend David R. Warren. (davidrwarren.com)

My friends over at Post Hearings recorded a set I did back in January at Newsstand Records and Books down in Rock Hill SC. They are good folks. You can check out the other performances over at their Facebook page (Post Hearings Facebook Link).

Written by Dave Rawlings and Gillian Welch, “Bells of Harlem” is a song I’ve been listening to a lot lately. The album “Friend of a Friend” has become one of my favorites over the last few months. I love the vibe of this song in the original recording and I think I am bringing something slightly different to it in this version. I’m not sure exactly what this song meant to Dave and Gillian when it was written but it seems poignant right now. With all of the confusion, corruption, horrible news and heartache, this song seems hopeful despite it all.

The artwork is a painting by a friend of mine, David R. Warren (www.davidrwarren.com) called “High on Low.” He was gracious enough to let me use his image for this track.

Well, we had a good run back in February with our friends Ghost of the Kodiak, and Brian Robert. A few weeks before the winter tour, actually the first show of 2016, I played at Newsstand Records and Books in Rock Hill, SC. The good folks down there recorded the whole night and have been putting out some videos for your viewing pleasure. Give it a look when you get a second. The song they chose from my set was “Know Too Much,” a track off the latest EP To Be True.

We’ll be at the Evening Muse in Charlotte NC this coming Tuesday, 3/22 with our friends Mail the Horse. We hope to see you out if you can make the show! If you don’t make this one keep an eye out. We’re booking dates across the summer now and we’ll be announcing our next tour soon. Thank you.

Getting Pretty excited for the new year already. Have a tour planned with my good friends Ghost of the Kodiak and Brian Robert. ANNNNDDD I get to open up for Time Sawyer at The Neighborhood Theatre. Hope to see you somewhere in Feb. Kicking off 2016 in Rock Hill this Friday night with some really great touring bands.